The Zamani Project generates spatial data which is processed to produce a range of digital products.

In the context of heritage documentation, 3D models are metrically correct, mathematical representations of physical objects. These objects can vary from statues to architectural structures, rock-art sites or complex sites with multiple monuments. To create such models, Zamani acquires relevant data using terrestrial laserscanning, photogrammetry, photography, GNSS and conventional survey methods during field campaigns. The acquired data is then processed to create point cloud representations of the objects to be documented. Subsequently a mesh is created which represents the object surface and photographic texture is applied to create a realistic appearance.

In the first stages of heritage documentation 3D models were purely geometric and not textured. While in the early years of the project texture was only applied to some Zamani models, it is now standard.

The generated models can be viewed, navigated and, after further processing, incorporated into virtual environments. Dimensional information can also be extracted. 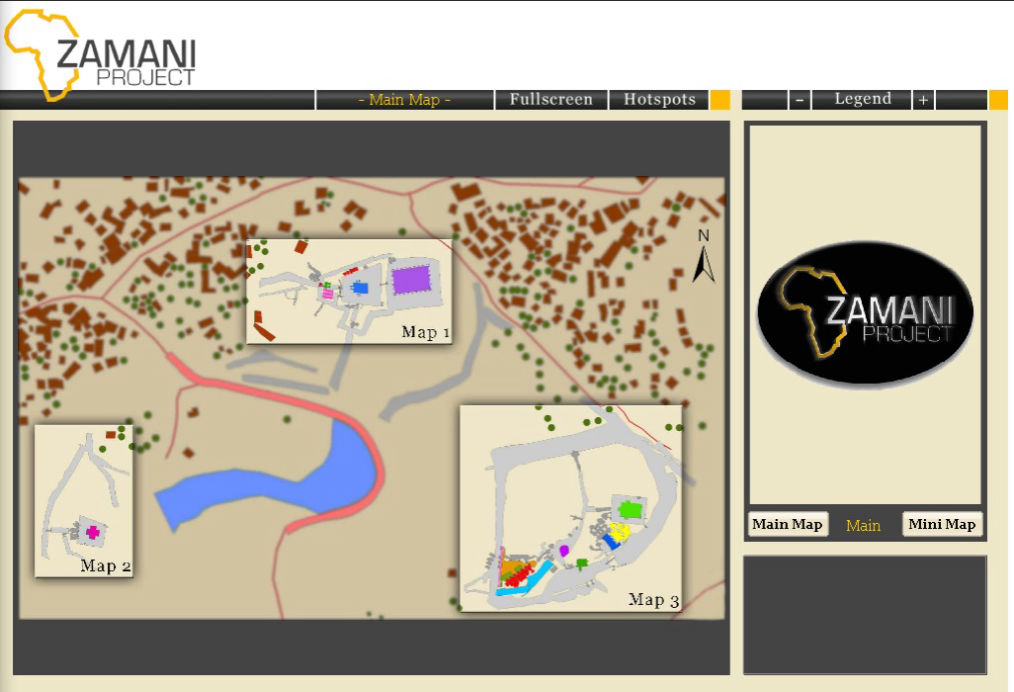 Panoramas are images with very wide horizontal and vertical ranges of view. Full dome panoramas capture a full 360 degrees view from a single position and can be viewed in appropriate software to afford the user a 360 degrees view of the area surrounding the panorama position. They are created by joining a series of wide-angle images. Individual panoramas can be merged into a panorama tour, which allows the user to freely move from one panorama position to another.
Sites can easily be explored in this way. 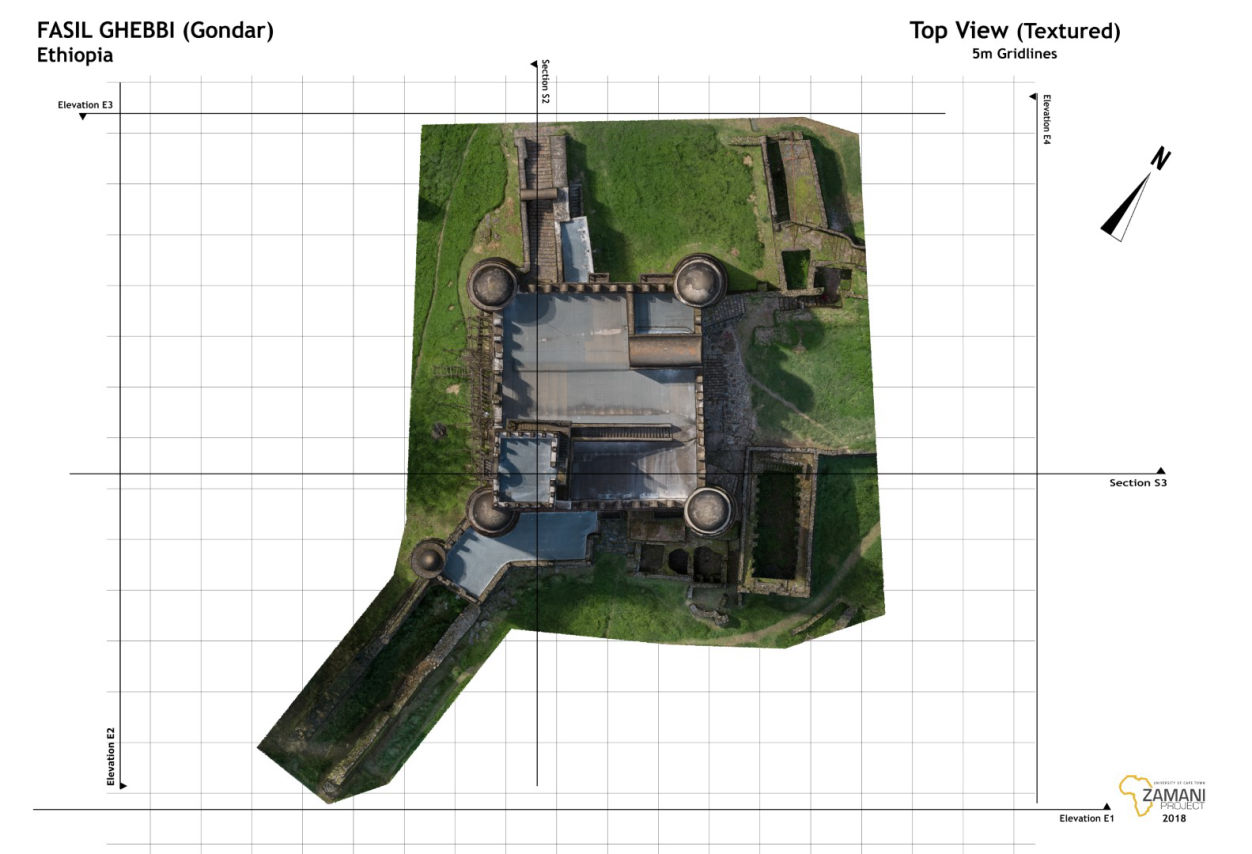 'Plans' show horizontal cross section through a 3D model, equivalent to a ground plan. 'Sections' through the model can also be produced at any other level or orientation. 'Elevations' and 'Top views' show facades and roofs respectivley. Plans, sections, elevations and top views are to scale and can be used for measurments. The Zamani Project produces sample sections for each site, but additional plans and elevations can be generated as required.

A laser scanner accurately determines the spatial position of millions of surface points on an object, thus creating a three dimensional 'point cloud' representing the object. Displayed on a screen, point clouds provide visual impressions of surfaces of objects and, in this case, monuments. The colour of each point in the diagram (right) denotes the intensity of the return signal to the laser scanner. Individual point clouds of an object can be combined to create a full 3D model. Point clouds can also be generated by photogrammetric methods.

The Zamani project employes photogrammetry in addition to terrestrial laser-scanning to increase the amount of detail and to fill gaps in areas where laser scanners cannot reach. 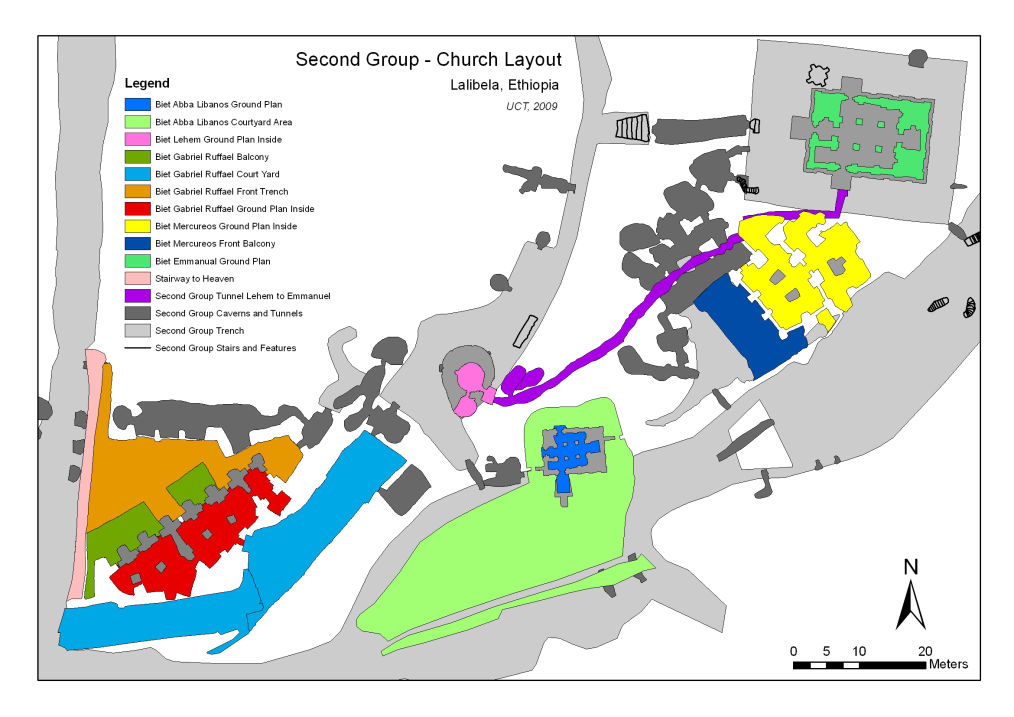 A GIS (Geographical Information System) consists of spatially referenced information about a natural or man-made environment. A GIS links attributes and characteristics of an area to its geographic location, creating an assemblage of diverse geographically referenced digital data. The information is displayed in a map format and can be managed, interrogated and analysed through user interfaces which show the relationship between different map layers. The Zamani Project generates a GIS for each site, which can be used for general site management, conservation and restoration projects.

Aerial, satellite and photogrammetric images are used in combination with existing contour data and SRTM data, where availabel, to create 3D landscape models of the topography surrounding a site. These are also used as a layer in the GIS of the site. 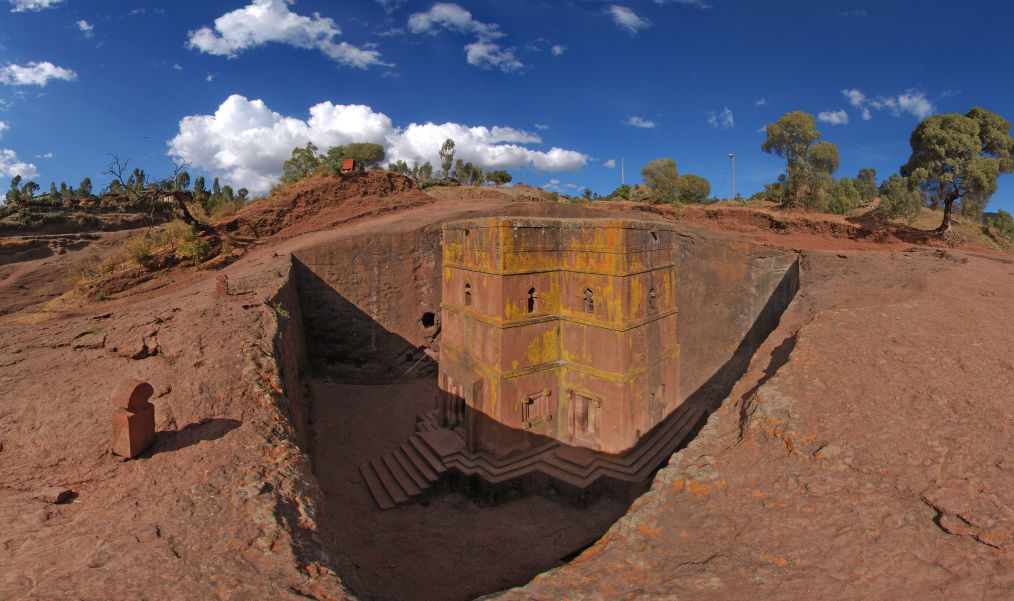 Digital images and audio-visual documentation are created at each site to capture the current physical environment at, and surrounding, the site.